A Growing 'Civilian-Military' Gap, and its Consequences

"A smaller share of Americans currently serve in the U.S. Armed Forces than at any time since the peace-time era between World Wars I and II," according to a new report from the Pew Research Center (hat tip New York Times).


During the past decade, as the military has been engaged in the longest period of sustained conflict in the nation’s history, just one-half of one percent of American adults has served on active duty at any given time.1 As the size of the military shrinks, the connections between military personnel and the broader civilian population appear to be growing more distant.

The data reveals is "a large generation gap." According to the report, "more than three-quarters (77%) of adults ages 50 and older said they had an immediate family member –a spouse, parent, sibling or child – who had served in the military."  In contrast, for people under 50, "57% of those ages 30-49 say they have an immediate family member who served. And among those ages 18-29, the share is only one-third."

Military service is now more concentrated in certain families:  "Veterans are more than twice as likely as members of the general public to say they have a son or daughter who has served (21% vs. 9%)."  And overall, what the report calls a "military-civilian gap" is more pronounced among younger people.


This suggests that the gap between veterans and the general public in the share that has family connections to the military may be a relatively new phenomenon. With the shrinking size of the military in recent decades there are now fewer connections between the military and the civilian world. This is reflected in the relatively small share of young adults (39%) with an immediate family member who has served in the armed forces.

The Pew report suggests that various political opinions are correlated with connections to family members who have served in the military, but there are deeper implications of the disconnect between Americans and American war-making.  The more distant and isolated Americans are from their nation's wars, the less they are politically engaged with American war policy.

Legal scholars argue here and elsewhere that the tendency of presidents to initiate military action without congressional authorization can only be reined in if Congress insists on playing its constitutional role.  But Congress will never play a more meaningful role in American war politics if the people aren't engaged.  The Pew Report helps us to see what appears to be a growing distance from the costs of war, potentially reinforcing contemporary political disengagement.

In War Time, I take up this point in the Conclusion:


In Iraq and Afghanistan, war...spread across borders as American drones fired on targets in Pakistan and elsewhere.  Death and destruction were the province of soldiers and of peoples in faraway lands.  The experience of wartime for most Americans largely devolved to encounters between travelers and airport screeners, as the Transportation Security Administration adopted intrusive new practices.  At home, wartime had become a policy rather than a state of existence....

As war goes on, Americans have lapsed into a new kind of peacetime.  It is not a time without war, but instead a time in which war does not bother everyday Americans.

I argue that keeping the war powers in check requires a politics of war, and that requires a citizenry attentive to the exercise of military power.  Our ideas about "wartime" play a role in the current disconnect, as a cultural framing of wartimes as discrete and temporary occasions, destined to give way to a state of normality, undermines democratic vigilance over on-going wars.

As Americans become more isolated from the costs of war, military engagement no longer seems to require the support of the American people.  Their disengagement does not limit the reach of American military action, but enables its expansion.
Posted by Mary L. Dudziak at 9:06 AM 4 comments:

Email ThisBlogThis!Share to TwitterShare to FacebookShare to Pinterest
Labels: costs of war, politics of war

'The Martial Spirit' in American History: John Hope Franklin on Militarization and War 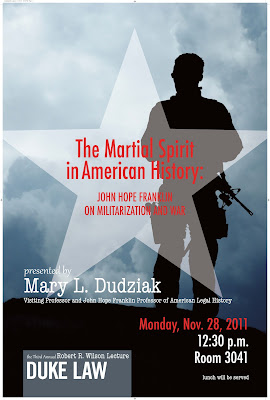 On November 28, I'm delivering a lecture at Duke Law School.  As the John Hope Franklin Chair while a visitor at Duke this fall, my initial plan was to simply draw a connection between Franklin's work and new scholarship on African Americans and war, as well as my new work on the nature of wartime.  But the more I read, the more I came to believe that engaging Franklin's work requires a rethinking of the history of American militarization.  And that became the lecture.  Here's the announcement:

On Nov. 28, legal historian Mary L. Dudziak will deliver Duke University’s Robert R. Wilson lecture titled “The ‘Martial Spirit’ in American History: John Hope Franklin on Militarization and War.” Her lecture will draw both from Franklin’s work and from recent historical scholarship on African Americans and war to place African American history at the center of American militarization.

The lecture will begin at 12:30 p.m. in room 3041 of Duke Law School, located at 210 Science Drive on Duke University’s West Campus. Parking is available at the Bryan Center. A light lunch will be served on a first-come first-served basis.

The role of militaries in enabling or undermining democracy has been on display in 2011 during the Arab Spring. In American history as well, said Dudziak, military conflict has played an important role in shaping domestic politics and culture. “African American history is often seen as peripheral to the history of war and militarization, but Franklin placed it at the center,” she said. “From one of his early books, initially titled The Martial Spirit, which detailed the growth of militias to guard against slave insurrection, to the dynamic impact of war in his sweeping survey, From Slavery to Freedom, Franklin shows us that African American history and the history of American war and militarization were intertwined, from the slave patrols, to the race discrimination in the World War II military that scarred his own family, to the military as a workplace for contemporary people of color.”

More details are here.
Posted by Mary L. Dudziak at 9:29 AM No comments:

Email ThisBlogThis!Share to TwitterShare to FacebookShare to Pinterest
Labels: other lectures and appearances

Just in from Publisher's Weekly:


Dudziak (Exporting American Dreams) riffs on the meaning of wartime and its legal implications in this brief cultural history. She examines the meaning of wartime in American history and notes that “an essential aspect of wartime is that it is temporary.” Because war is seen as provisional, Americans have been willing to accept “exceptional [wartime] policies” that enhance presidential power and erode civil liberties—a view generally endorsed by the courts. What if, Dudziak asks, “American war spills beyond tidy time boundaries” and wartime becomes “normal time”? The executive branch, she contends, has defined the war on terror along the lines of the cold war, as an ideological conflict with no boundaries. Dudziak laments that the courts generally have continued to treat wartime as temporary even though its meaning has changed. Wartime, she concludes, has “become a policy, rather than a state of existence” and need not cause us to suspend our principles. Closely argued and clearly written, this is a scholarly work with popular appeal. (Feb.)

Mary L. Dudziak is the Asa Griggs Candler Professor of Law and Director of the Project on War and Security in Law, Culture and Society at Emory University. War Time: An Idea, Its History, Its Consequences was published by Oxford University Press in 2012.
Homepage
Emory Webpage